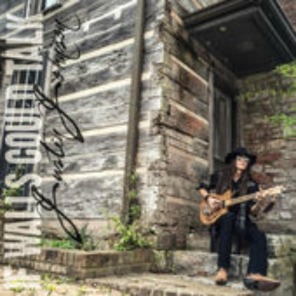 Maestro Justin Johnson’s “If Walls Could Talk” is an intriguing album of engaging instrumental compositions and arrangements with extraordinary layers throughout all 12 dynamic tracks. A must hear that should not be defined by genre alone.

A fellow roots fan first introduced me to Johnson’s music a couple of years ago when he was on tour performing with his Cigar Box Guitars (CBG) in Coos Bay Oregon while also turning his shows into teaching  moments. Educating school children (and parent & teachers) about CBG’s and their relationship to the history of Roots music; keeping an important art alive and thriving with new students thanks to Justin Johnson.
Whether it be one string or 12, Maestro Johnson is a string virtuoso and he is an ambassador for Roots music.

This newly released CD & DVD combination “If Walls Could Talk” showcases the impeccable string musician that Johnson is; spotlighting the individual layers of who he is as a musician, and who he is as an artist. These 12 tracks speak volumes to how genuine Johnson stayed to his own roots (pun intended) on this project, and how true he stayed to the music that unfolded in the Tennessee Braxton Dixon built house where he lived during the composing and arranging of this album.
The brilliant nod to the stunning voices of each of the instruments Justin chose to use also feels to this listener that he intentionally also stayed true to his signature sound and roots style.
Justin Johnson has created an archive of music history with this album.

Album producer John Carter Cash says it far more eloquently about Justin and his music; “the very soul of America.”
If you’re a lyrically driven music fan who’s not typically an instrumental fan Justin Johnson is going to convert you with his introspective melody lines.
If you are a die-hard instrumental fan “If Walls Could Talk” will speak to you on many levels with the dramatic voices of each string instrument that Justin and album producer John Carter Cash obviously put much thought into choosing.

If you are a returning Justin Johnson fan then you will be happily content with this new addition to Johnson’s catalog.
As is my custom when living listening to a new album I intend to write about I begin compiling snippets of notes. “If Walls Could Talk” struck me right away as being quite special. A repeated note I made throughout the week was referencing the emotional roller coaster this album takes the listener on; each song evoking wonderfully intense feelings of nostalgia, lightness, sadness, mourning and moody
feelings…. just like music is meant to do- just like music should do.

The opening track for me is nostalgia in music, captivating me right away with Johnson’s epic interpretation of “Summertime,”
Justin perfectly sets up the stunning ambiance for the phrasing of the entire album with this classic song with the strikingly beautiful unique voice of the 1923 Gibson Mandolin. It’s fine nuances bring a richness of depth to this classic that makes it Justin’s own. The mandolin ‘singing’ the lyrics is perfectly accompanied by a 1963 Gibson Folksinger and “Magic” an upright bass. This is a treasure to any collection of music, it’s also a fabulous crossover for different categories of collections.
Though I could easily write about each of the 12 tracks, I’m not. I don’t want to intrude on anyone’s first listen who may have not yet heard the album. Each listener is going to hear something different from these walls as this music will touch a personal chord in each one of us.
While speaking of personal and again my love for nostalgia in music I want to address one more track.
So many memories are wrapped around music

Track #5 “Wood & Weed” takes me back in time to another phase of my life when traditional country music was what I was being raised on. “Wood & Weed” is definitely not country, nor is it traditional. Great roots music is organic in nature and allows for the listener to hear in the composition that which reaches inside and grabs the individual attention of each of us..I am taken to my childhood with this track.

Throughout the album there is almost a mythical ‘poetic-ness’ – for me it’s all about the instrument voices and the songs they sing. Much like a Museum of Art I find myself associating this album to a dream come true for an audio curator of string instruments.
Audiophiles/musicologists like myself however will find this no dream, instead happily we find a reality in our ears when we hear the brilliance of Maestro Johnson perfectly translating the voice of each incredible instrument that he played on this album.
*Recording Notes*
Mandolin- 1925 Gibson Lloyd Loar F5

Resonator Guitar- 176 Dobro Model 66
Acoustic Guitar- 163 Gibson F-25 Folksinger
Acoustic Guitar-Martin Limited Edition OM-28WRosanne Cash Signature Model #2
Electric Guitar- Little Crow Guitars Custom “Justin Johnson”Corvinho Model
Cigar Box Guitar- Homegrown Strings-4-string
Baritone Ukulele- Willow Glen Guitars
Upright Bass- “Magic”
I would be remiss if I didn’t mention the video footage of the recording sessions on the DVD included in the CD/DVD set. I purposely left watching the DVD until I was ready to write and I am glad I did as I wanted to write without any bias; After watching the video I know that would not have been an easy thing to do.
Following Justin and Nikki for months prior to release they shared so many aspects of this project during the composing and then the recording that their sharing endeared them both to fans,this writer included. Leaving the DVD’ for the last was much like an epilogue to living vicariously through Justin & Nicki over the past several months and  allowed for no bias on this listener/writer’s part.
The music that went on inside those walls is simply brilliant, and that’s no bias. Like blueprints, that’s a fact
If Walls Could Talk Cd/Dvd available here www.RootsMusicSchool.com
“If Walls Could Talk” Mp3’s available at all outlets below here:
https://www.amazon.com/Walls-Could-Talk-Justin-Johnson/dp/B01J2BT2RY
https://itunes.apple.com/us/album/if-walls-could-talk/id1138032207
More Justin Johnson here http://www.justinjohnsonlive.com/
and here http://www.youtube.com/justinjohnsonlive